The lifetime of a star

The lifetime of a star

What is a star?

A star is a spherical celestial body, consisting of luminous plasma. In a star, the pressure and temperature of the internal gas concentration is so high that nuclear fusion reactions take place, in the core the hydrogen atoms merge into helium, thereby producing an enormous amount of energy that is emitted by the star as electromagnetic radiation at different wavelengths, including visible light. 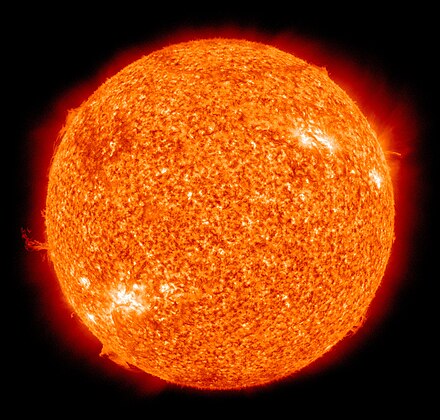 Size of a star

The diameter of stars has an even greater variation than the mass. The diameter of the smallest stars are about the same size as those of Jupiter: 143,000 km. But there are also very big stars, called ‘the red hyper-giants’. The diameters of these stars can be more than one billion km.

Lifespan of a star

One could expect heavy stars to have a longer life than light, but this is not the case. The energy production of a star massively increases with its mass. Consequently, the lifetime of a star is inversely proportional to its size.
The heaviest stars, the Hyper Giants, have a lifetime of at best a few million years.
Medium-sized stars, to which the Sun belongs, exist on average 10 billion years.
The lightest stars, the Red dwarfs, have an life expectancy
of around 10-20 billion years, about a thousand times more years than the current age of the universe.

The birth of stars

Stars are formed from gas clouds that are mainly located in the spiral arms of galaxies. A well-known example is the Orion Nebula, in which stars with ages between 500,000 and 2 million years are found and where the star formation is still going on. When such a gas cloud contracts, local densification occurs. In such compaction, the temperature rises until the temperature and pressure in the center are high enough for nuclear fusion to take place. The compaction is now in equilibrium and no longer contracts: a star is formed. 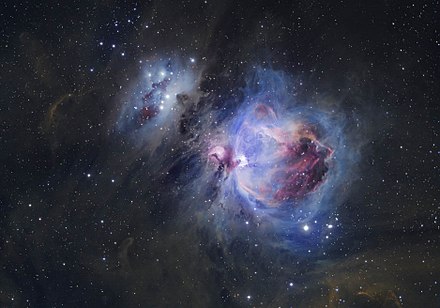 The death of a star

As the hydrogen atoms in the nucleus become exhausted, they do not only merge into helium, but all the way up to iron, this is a problem because a star persists due to the balance between the gravity and the radiation of a star, if one goes out of balance the star “dies”. So the iron in the core disturbs the balance of gravity and radiation, causing the star to die. After this there are 3 different possibilities:

The first possibility is with a star with the approximate mass of our sun. After a long time he will grow into a red giant and he will become much bigger until a moment when he can no longer cope with it and explodes, causing him to lose half of his mass. It will spread like a planetary nebula. What will remain is the core, it is relatively small, but has half the mass of the original star. A white dwarf still emits heat, and after trillions of years this dwarf is also exhausted making it a black dwarf that emits no heat. When the last white dwarf goes out, all life and chance of life will be gone 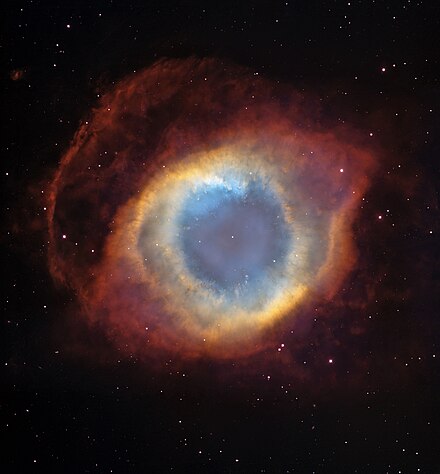 If the dying star only has 1.5 times the mass of our sun its protons and electrons in the nucleus are fused to neutrons at his death. Here all other layers of elements are washed away from the neutrons in a huge supernova. What remains is the neutron star with a diameter of about 25 kilometers. The neutron star may not be big but the mass density is breathtaking, 1 cubic centimeter of a neutron star weighs as much as 1.000.000.000.000 kilograms, to put that in perspective a piece of neutron star the size of sugar cube weighs as much as 3 times the Empire State Building! Neutron stars are also phenomenally fast, some even rotate at 24% of the speed of light, which gives them an epileptic shape and they create a magnetic field, which we call a pulsar. 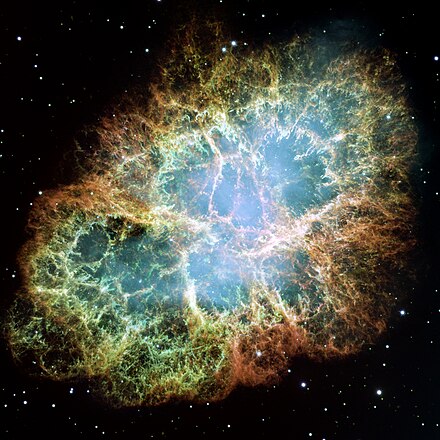 When the star has a mass of more than 5 times our sun then this star will become a black hole. A black hole is an astronomical object in space that even light can not escape from. It is an area where the laws of physics do not apply. A black hole is not really black, it gives off a warm glow. Around the black hole there is sometimes an accretion disk. This is only when there are stars around him and that can be used as fuel. This accretion figure consists of gas from one of the nearby stars that is captured by the enormous attraction of the black hole. The closer the gas is to the center, the warmer the radiation the gas makes. A black hole is also characterized by 2 rays perpendicular to the accretion disk, in which ionized matter is emitted as an extended beam. Central to all this lies the black hole. What you see is not the black hole itself, but the event horizon, that is the point where nothing can escape, even slightly. We know that in the middle of the black hole there is a singularity. A singularity is an infinite small point and has an infinitely large density. There is nothing left on that point. We also know one thing for sure, you will die there, in a cool way. If you are almost at the event horizon you will experience a process called spaghettification, which means that the difference in gravity is so great that your body is stretched to 1 atom thick. A black hole can also disappear, through a process called Hawking radiation, here we have to look very carefully at empty space, because empty space is not really empty … every moment 2 sub atomic virtual particles come into existence and they destroy each other directly , a particle is positive and the other negative, now you will probably ask yourself: “But did we just learn that matter can not be made or destroyed?” That’s right, but if those particles destroy very very quickly the universe will close its eye for that. But at the edge of a black hole, the positive particle called a positron has enough energy to escape and become radiation, so the negative particle called an electron can not be destroyed, so it falls into the black hole, now you think back : “But you have just made a particle and so you have created matter and that is not possible!” That is why the mass of the black hole will be reduced so that this is in balance again. This process is slow at first but as the black hole gets smaller it goes faster, the black hole will also become very hot due to the large amount of radiation. Eventually there are 2 types of black holes: stellar and supermassive. Stellar are ordinary black holes but Supermassive are huge black holes that are in the center of all the galaxies. If in supermassive black holes the rays are perpendicular to our view, we call them a radio system, if they are on a corner this is a quasar, and if we look right into the beam it is a blazar.